For this POTA (Parks on the air) activation, coordination was needed with an already planned trip that my wife was making to the area. It was agreed that I would drop her off and then drive another 45 minutes to arrive at this park, this time with our dog, Bonnie along for the ride and walks. (at the end in total, it was 5 separate walks that the dog got during the whole trip and loved the opportunity of being in so many different places).

There are no rules forbidding motorised transport or operating from a parked car, so for this activation, like the last one, I decided to do just that. I wouldn’t even put up the mast and linked dipole, rather I would use the Komunica HF-PRO2 on a three-magnet mount on the car roof and operate from within the car. The temperatures were expected to be just above freezing and indeed the first of this year’s snow arrived at the location the night before the activation.

This would be an early start and so all radio gear was loaded into the car, the Tuesday afternoon before the Wednesday activation.

After dropping my wife off, the road south was VERY curvey and took the best part of the 45 minutes that Google maps told me it would. Part of the way, I stopped and gave the dog another walk as she wasn’t so happy with the road conditions. Upon arriving at the location, the first task was again to take the dog on a 15-minute walk so that she could “take care of business” before I could start to set up the radio. After being put back into the back of the car she settled down and just listened to my attempts of making radio contacts.

Little did I know that this was not to be as easy an activation as I had expected!

I set up the Komunica HF-Pro antenna on the roof of the car using my 3-Magnet base as I had done on the previous activation, running the coax in through the rubber at the top of the rear door. The radio (the Xiegu G90) was set up on the passenger’s seat, propped up a little to make viewing the display easier but sun reflection was not going to be an issue this time.

After tuning around on 20m, I spotted myself and called CQ. After a while Ron, G0RQL came back to me and we had a short QSO. The whole radio seemed a little quiet though. To start with I put this down to the location being very quiet. In fact, soon after that, I lost power to the radio while moving it around on the seat. Previously this had been a bad connection in the inline fuse holder but as I was pressed for time – I only had a maximum of 90 minutes of operation time before I would have to return to collect my wife, I decided to change from the LifePO4 4AH battery using the Xiegu supplied power lead to my LiHV 4Ah battery which uses a lead that I made up. That worked and I was off again trying to find stations but I was getting no calls. At this point, I saw the SWR which was high. I had not seen it earlier as before losing power, the automatic tuner had been enabled and that ATU will literally match a wet piece of spaghetti to the radio!  So I got out and checked that I had the coil set correctly on the antenna – it was correct according to my list. I checked the connectors but all looked OK and the SWR stayed high. I changed the antenna setting and the radio to 40 metres hoping that would bring me more contacts (in POTA ten contacts are needed and my time was running out quickly). Still no luck as the SWR was high on 40m as well.

It was time to change the antenna. Rather than put up the fibreglass mast and linked dipole, I decided to switch to my other HF-PRO2 antenna which I mount on a small tripod with radial wires. My streak of bad luck was still with me as the connecting wire on the tripod, where I normally clip the radials onto had gone AWOL. I managed to clip to bare metal which worked. This took more valuable time however it got the needed result. Once I was using that antenna, the SWR was normal and I started making contacts and attracting some deliberate QRM from some idiot dumping a carrier on the frequency I was on for minutes at a time. Time was running short and moving frequency and re-spotting as well as calling another POTA operator for a “Park-to-Park” contact got me to 11 contacts in the log and I was only 10 minutes over my planned departure time.

Of course, before setting off down that winding road again, it was best to take Bonnie, the dog, for a quick walk which I did after literally throwing the antennas, tripod, magnetic mount and cables onto the back seat of the car. I texted my wife to say I would be 15 minutes late but in fact, it was only 5 minutes as I was able to reduce that Google travel time by 10 minutes by applying a little heavier right foot on the way back.

73 ’til the next activation!

This was to be my first POTA (Parks on the air) activation. POTA is like WWFF (an award scheme in which I haven’t taken part) but was formed in the US as a follow-on from the ARRL National Parks on-the-air celebration. It has taken off in the US and now is spreading internationally. They have a good spotting and logging web infrastructure, which is essential nowadays. The award definitions are very varied and nothing like the other schemes that I take part in. A minimum of 10 contacts are required to qualify a park activation and the activation itself can take place anywhere within the park’s boundaries. For some POTA awards, the park can be activated more than once a year.

What attracts me is that this park is only a 30-40 minute drive away from my home (in fact it’s even closer but I picked a nice spot by a large lake to go to). There are no rules forbidding motorised transport or operating from a parked car, so for this first one, I decided to do just that. I wouldn’t even put up the mast and linked dipole, rather I would use the Komunica HF-PRO2 on a three-magnet mount on the car roof and operate from within the car. as it turned out with temps between 4 and 8 degrees centigrade, this was a wise plan!

I installed the appropriate POTA spotting App on my phone and checked it was working.

This activation would take place late morning, so that I could take the dog for her morning walk before leaving and get back just after lunchtime having spent about 90 minutes operating. Nothing needed to be loaded in the car until the morning of the trip with this later-than-usual start.

This was going to be a trial of this “luxury” set-up and my, chosen from maps, location to see if it was indeed accessible.

I decided to take the country road route rather than the autobahn as according to Google it would only take about 5 minutes longer. This was true however the number of small villages this took me through was a pain, so the return route would be via the Autobahn.

On arriving at my site, I took a walk around and made some photos before returning to the car, setup up the radio and antenna and tuning around to see what I could hear. I started on the 40-metre band which was full of stations from end to end (and this was a Friday, not a weekend). I found one portable station calling CQ, so I decided to give him a call to make sure I was getting out. No Issues – a short, 59 each-way contact with Luc, who was actually activating a WWFF park location.

I then saw another POTA activator on the spotting page and called Stuart M0OVG for my first “park-to-park” contact with 55 reports each way.

Now that I was happy that everything was working, I found a free frequency and spotted myself on the POTA website and got a couple of calls from Poland. At this point, I managed to contact Mike 2E0YYY who was still out in his local park (not POTA), so I moved to 20m to work him and to test out the new QRP radio – a Xiegu G-106 which I had along as well as the Xiegu G90. Tests were performed and while the little G106 with my external RF-Clipper speech processor was workable it was down a couple of S-Points on the more powerful G90 radio, which was running 20 watts of the speech-compressed signal.   I still have the feeling that the G-106 is not as loud as it should be however in these tests the 20m band was up and down with QSB and so a really accurate test was not possible.

When I finished with Mike, I re-spotted myself on the POTA website on 20m and the calls started. I ended up with 20 contacts in 45 minutes. A lower rate than when I do a SOTA activation but not bad for a scheme that is still new in Europe. I finished off back on 40m to get another Park-to-Park contact with Dave G8XDD/P who was in two different parks at the same time, in the UK.

All in all, I think this went very well for my first POTA activation. Although the site was fine, I may try a different location the next time that I activate this park, given that there are locations all over the 1100 square kilometre park to choose from! 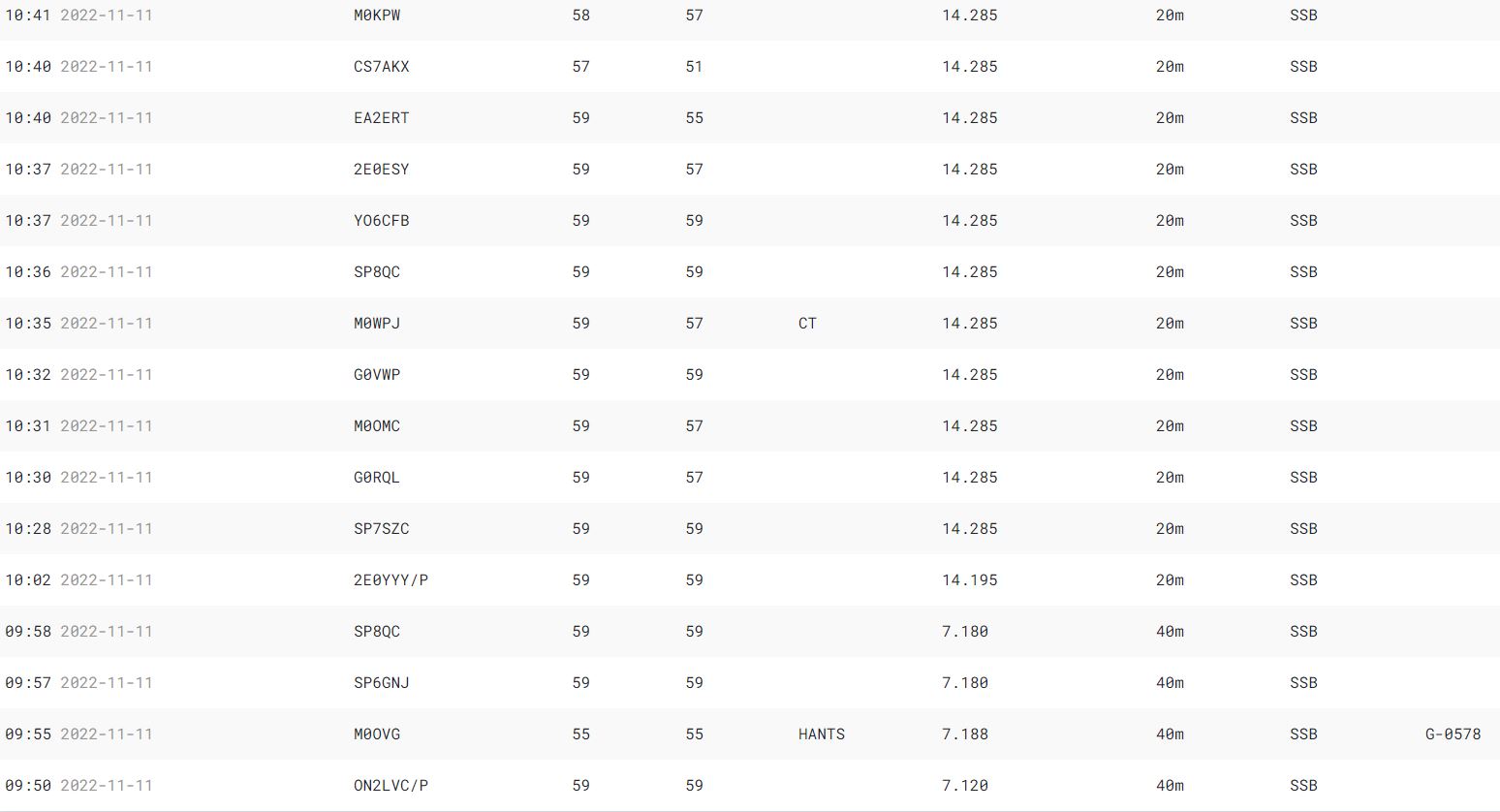