At the World Radio Conference in 2015 (WRC15) a small low powered band was accepted by all parties to form a new sixty metre band, between the current eighty and forty metre bands.

Prior to this conference some countries had already allocated some specific frequency set channels or mini-blocks of frequencies around the 5MHz frequency. In some cases these were available only under special Notices of Variation (NoV) or experimental licenses. In other countries these frequencies were simply allocated to the full license class in a country. The problem with the individual approach was that as there were limited overlap on the frequencies, worldwide or even inter-country contacts were (and still are) difficult. In order to try to get some coordination between countries the IARU proposed a new band which initially was rejected by some major countries as they were afraid of interference to existing services around 5MHz. After a lot of work a compromise was found with a band of just 15KHz and a limitation of 15 watts EIRP.

Although passed at the WRC and hence ITU approved, each country could chose whether to implement or not and certainly when to implement. The WRC15 request was that the band be implemented before the end of 2017, ideally by the start of 2017.  Some countries such as Holland implemented the proposal very quickly while other countries needed more time. Towards the end of 2016 however there was a spate of band allocations of the new WRC15 60m band including Germany, hence the need for me to get an antenna arranged for the band. I already had a rig that was 60m capable, the IC-7300, but my main antenna – the 40m loop would not work well on 60m.

I considered whether I should put up an extra antenna for 60m, perhaps just a dipole or a vertical, but for the Dipole I have limited space where it might go without affecting the loop and a vertical would perhaps not give the closer-in contacts that are what 60m will provide. As the limit is 15w EIRP from the antenna many signals on the band are likely to be weak and as such, as much gain from the antenna that I can get would be welcome. Hence a 60 metre loop, if I can fit it into the garden would probably be the best option. There is however no way that I can fit a second full sized loop for 60m into my small garden – I will have to extend the existing 40m loop. Of course I don’t wish to lose 40m when I get 60m. I was hoping that I might be able to have the antenna work on both bands, but looking at the Antenna Analyser with the loop set to cover the 5351.5 to 5366.5 KHz WRC15 60 metre band – the next dip (i.e. resonant point) is nowhere near the 7.0 – 7.2 MHz 40 metre band.

For practical reasons, the extension would be another loop meeting the existing loop at the top of the feed point mast. At one point, I even thought I might be able to get a 20m loop, a 40m loop and a 60m loop by switching at the feed point. This was not to be however as I found that I was having to cut back the extension loop until it was far too short to ever be resonant on 20m, to get the 40m plus extension loop resonant on 60m. The basic problem is that there is no direct mathematical frequency relationship between the new 60m band and existing bands.

Here are a couple of designs I worked on during this project – This one should allow the switching from the shack between 20, 40 & 60m – until I found the extension loop would never be resonant on 20m! So now a simpler design was needed – Just to switch out the extension when I wanted to use the existing 40m loop (on 40m and 20m). BUT WAIT…. the design above also used a 3:1 Balun (which if you read the article on the 40m loop you’ll see I tried out). I find however that the Q-Section (a length og 75 ohm coax of a specific length) actually allows the antenna to work better than with a Balun which in the case of the loop appears to increase the base noise level. So leaving the cut for 40m Q-section in place while working (sort-of) only allows an SWR of just under 2:1 on 60m, whereas it gives a 1.1:1 SWR on 40 metres – so a 60m Q-section when operating on 60m makes good sense, but again would require some kind of switching. the solution I decided on for this is to have an extension to the 40m Q-section that is in circuit when the antenna is switched to 60m and shorted out when the antenna is operating on 40m (the same approach as with the normal and extension loops). So I either need two change over relays or ideally a DPDT relay that would be wired so that the 60m loop extension and q-section extension are shorted out when there is no power on the relay and 12v is applied to the relay when operation on the 60m antenna is required – here is that circuit:

(NOTE I chose to short out the extensions (loop and Q-section) rather than simply switching between them as that would leave extra cable attached and could affect the tuning of the antenna. Only once I can test this will I know if this was the best approach.)

Here is the prototype (rather messy) antenna switch box. I have applied 12v to the relay supply and it seems that everything switches as expected. 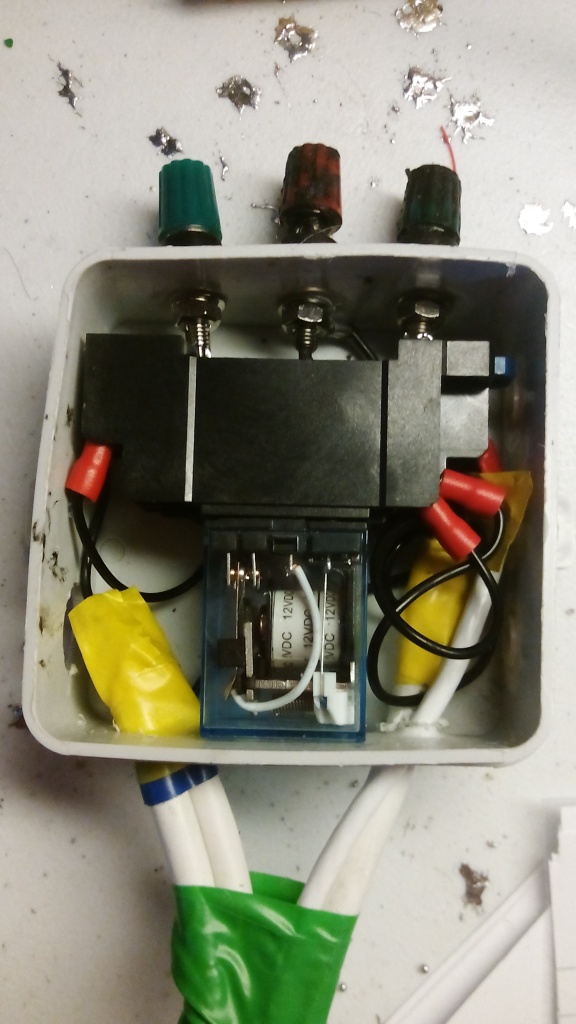 The connectors at the top are for the antenna loops with one common connection. The 40m loop, one side is always connected to the earth side of the coax while the other side either goes to the 60m loop extension (when the relay is powered) or over the shorting link through the (un-powered) relay to the centre of the existing coax.

The existing coax is of course the 75 ohm Q-section, which also can be extended with the extra length required to make the 60m Q-section.

23rd. April 2017 – After taking down the mast and removing the previous feed-point, I installed and connected the antenna wires to the unit shown above and re-raised the mast, then switch the feed cable to the shack from the now taken down feed-point with Q-section, to the new one and stopped for lunch.

After lunch I attached the Rig expert AA-30 antenna analyser in the shack and although, still using the same antenna wire lengths, the trace shown was not very promising. The dips were very jagged, which by experience can be caused by a bad connection and the resonant points have dropped in frequency.

Before lowering the mast and removing the old feed point, the antenna has reasonable dips at:

While there are not brilliant, they are “in the park” and could be adjusted into bands as they were when the antenna was originally installed.

After replacing the simple feed point with the relay box, the resonant frequencies, with the same length of wire (should be 40m loop only, 60m section of antenna and Q-section, shorted out as no power applied to the relay):

I will check the connections and then remove the 60m extension wires and see if the loop resonance comes back to about the same as before ….

When trying something new, something experimental, while one hopes for success, one also has to be prepared for

Unfortunately after checking all connections and removing the 60 metre extension wire completely, the Loop (which had not been physically changed) would still not resonate where it should do.

My conclusion is that the inclusion of the (non-coax) relay at the feed-point changes the impedance in such a way as to affect the loops resonance. I could have changed the size of the loop to try to get it to resonate where I want it to be but then I checked the resonance on (and near) 20 metres – there was nothing shown on the analyser – this configuration was never going to work. It was an interesting attempt to improve the capabilities of the antenna while retaining it’s current performance on 40, 20 and other bands but this experiment has proved that this simple antenna is best left alone. I have returned my 40m Sky Loop back to how it was a couple of days ago. The Sky Loop antenna is a simple antenna, it’s probably best to leave it as it – it works very well. I now need to look for an alternative antenna for 60m (and perhaps better NVIS on 40m for sub-500km stations at the same time).

Since I have cancelled the idea of extending the loop, I have now been able to install my Chinese HF20A end-fed random length wire antenna in a better location away from the house, using the extra masts that were installed for the extension loop for the skyloop and this seems to work quite well. I have one case on 20m where I received a station on the HF20A better than on the loop, so the fact that the HF-20A is not directional whereas the loop is on multiples of its resonant frequency can be seen. The HF-20A also works on 60m without a bad VSWR reading. I have yet to make a contact on 60m with the antenna simply because the stations I have heard so far have been outside of the WRC15 band which is allocated for Germany.