Still looking for summits that I haven’t activated this year, but also ones that I might achieve the contacts into VK that I had a week earlier, I had to rule out any summits that either had a long drive to them or needed a lift of some kind to access (which normally only start at 9 am local time). Of course, I’d like the higher scoring summits but with the first two restrictions, that’s difficult. So after searching, what I came up with was a plan to activate two summits that I know and two new-to-me summits. I entered the lat/long for each of the parking spots into the car’s GPS-Navi system so that I could rely on that to get me to the best spot to start my walks from. My hope was that from the first and even the second summit I might get contacts into VK/ZL if I set off from home early enough. The fourth summit, not listed here was the 4-point DL/AL-145 Hauchenberg which will have to wait for another day as once I was finished on DL/AL-146 Sonneneck, I was too tired to take on another challenging long walk.

Leaving at 6:20 am local time, I was well set to meet my schedule and the trip down to Blender was fairly good, only with some delay in the early morning traffic going around the Kempten ring road. Once at my parking spot under Blender, I loaded up with both antennas (SOTABeams linked dipole and loaded vertical HF-PRO-2) so that I could possibly run some comparison tests if I had time.

Despite arriving almost 30 minutes before my planned time Mike 2E0YYY/P must have been up even earlier in the UK as he was already setting up on G/SP-013 Gun. So after the first shock of the seat bench, that used to be on this summit, being gone, I laid down my plastic sheet on the grass and started to unpack and put the station together.

All seemed to go well, I had the 6-metre mast in the screw-in sun umbrella base and the linked dipole running down from it in inverted-v configuration, the coax back to the plastic sheet where I had the G90 connected to its battery box and ready to go. I tuned to Mike’s frequency and quickly called him but looking at the display, I could see there was an infinite SWR on the antenna. As a quick fix, I tried the internal tuner in the G90 – even it could not do anything with it. There was no alternative, I had to lower the mast and check both the links and the feed-point. All seemed OK, so my conclusion at this point, after another quick test (which still showed an infinite SWR) was that the problem was either in the PL259 plug or the coax cable itself. I couldn’t do anything about that on the summit so this had to wait until I got home. Later it turned out that I was correct, the centre conductor of the thin coax was no longer connected to the centre pin of the PL-259 plug. Luckily I also had the Komunica HF-PRO-2 with me and within 5 minutes, that was set up on its converted photo tripod with radial wires and the contact with Mike was made. Unfortunately, no contracts were made into VK/ZL from this summit. I believe I would have had a better chance with the dipole, if only for its increased height. That being said, I could hear stations from VK & ZL on the vertical and had there not have been so many other high powered stations calling over the top of me, I might have been able to get a contact or two “down under” – another time …

With the problems with the dipole antenna, I had of course lost a lot of time, so once the flow of calls stopped, I decided to take one last try at calling Ron ZL4RMF, without success and then packed up to go to the next summit, Urserberg which I could see from where I was on Blender.

The drive from Blender to Urserberg (actually the public car park for the local lake is at the start of the track up to Urserberg) only takes 10 to 15 minutes. When I was getting close, there were road signs for the road being closed, but … it said the road was open as far as the löake! Great – and so it was – the road was open just up to the entrance to the car park. The road after this point winds through the forest and the reason for the road closure was that they were felling the trees closest to the road and in some cases, they would be falling across the road, so the road definitely needed to be closed!

I had originally considered taking the mast and linked dipole to this summit as well but given the fact that it was broken, the remaining summits would be activated with the HF-PRO-2 only. Mike was still on G/SP-013 Gun when I got to the summit and set up while being watched by an inquisitive cow behind a single wire fence. This was of course a “different” S2S for both of us as I had changed my summit. Mike had just finished a contact into VK3 but commented that the noise on the bands (40 and 20m) had not improved. Indeed the noise was like a badly suppressed car or motorbike ignition system of years ago and this was heard both in the UK/Europe and in VK/ZL. This was activity in the ionosphere making receivers worldwide desense as the AGC circuits reacted to the pulses of electrical noise!

The views from Urserberg, looking down from the top of the ski-fields are lovely now that the early morning mist had mostly cleared but the temperatures were still sub 10°C even though the sun was coming out. After working Mike I spotted myself and the calls came flowing in. As I was a little behind schedule and I did not know how difficult the next two summits would be, I decided to call it quits after the calls dried up on 40 metres and didn’t try 20 metres. Once packed up it’s a good 15-20 minute walk back down to the car park, where I decided to have lunch. 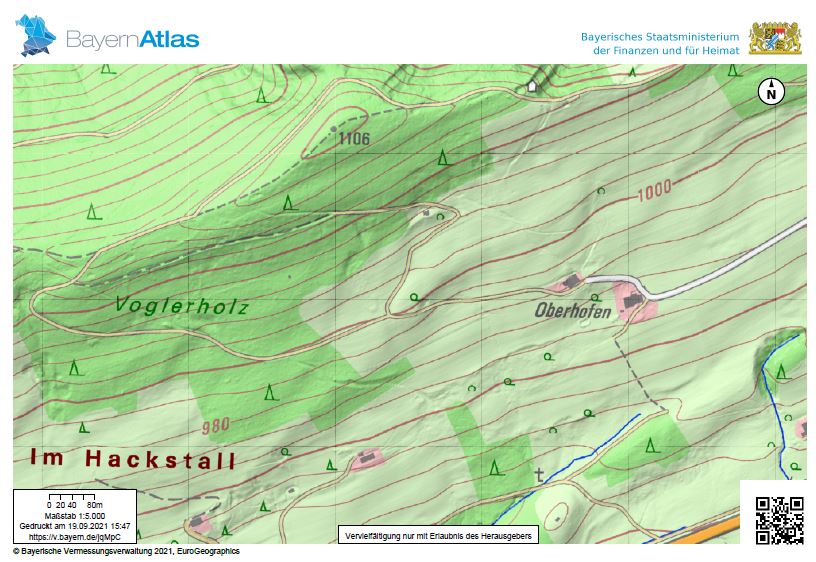 This was a new summit for me so I arrived and parked at the end of the road in Oberhofen, just before a gate on the road by a house that marked the start of private land. Private as, no car access is allowed, walkers are welcomed – including by the dog who lives at the house. Equipped with the map shown above, I set off from Oberhofen with my reduced rucksack (only talking the HF-PRO2 and tripod, not the mast and wire antenna on this long walk), and it was a long walk, which took me 40 minutes to get to the summit. I followed the “main” track shown on the map over Voglerholz and curving back up to the summit. Accidentally on the way back I came back on the other route under the summit as the track indicated on the map as being small has been expanded and sand and stone laid down so that tractors and diggers can get access using this route. On reaching the top track, the track coming in from the left is actually part of the Europe-wide “JackobsWeg” pilgrims way. I have come across this on other SOTA and HEMA summits recently. It seems the pilgrims are expected to climb all of the summits along their route!

As this was my first time on this summit, I was happy to find the tripoint stone and about 5 metres further on a nice bench and a wooden sign on a metal post declaring this as Sonneneck Höhe – which is the correct name for the actual summit.

After setting up the gear, with the HF_PRO-2 antenna set to 40m, I saw there were several other activators shown on SotaWatch and one – OE/HB9BCK/P was a good 59 signal so I called him for a 6-point S2S contact meaning I had now had S2S contacts on all 3 summits. In fact, soon after when I was calling CQ, I also had an S2S with Chris DL1CR/P who I haven’t talked to for a while – he was out on the DM/NS-122 2-pointer summit. After about 15 minutes of calls on 40 metres, I was determined to get some contacts on 20 metres as well and three more contacts from Sweden, Finland and Spain went into the log.

This was the point where I considered my next action. I knew I had about a 40-minute walk back to my car and then an over 30-minute drive to the next summit which, I also didn’t know and looks like it was as long a walk as Sonneneck had been, so rather than risk anything, I decided to cancel that last summit. I have the mapped route for it, the next time I am in the area, possibly when there is snow on the ground and the 3 winter bonus points are active?

As mentioned above, the return to the car did not go quite as planned. Through inattention and not retracing my route on the map, I ended up coming back via a different route. This route may have been 5 minutes quicker as it turned out. It had been threatening to rain for a while and there were a few light drops of rain, which also confirmed my decision to leave the last summit. That said, as soon as I set off home in the car, the sun came out and on arriving home it was up around 20°C!

The drive home was uneventful and I was home by 3 pm – ready for a cool beer and a rest!