With constant bad weather from the start of March I wanted to get out and grab some Winter bonus points and at the same time make sure all equipment was working, before I was to meet up with Brian VK3BCM from Australia and take him to some SOTA summits. The previous week, I had travelled out to DL/AM-177 Kirnberg only to be forced to pack up after having got the antenna up, due to the high speed and bitterly cold winds. I had alerted for these summits a couple of days earlier but again with the weather had to postpone them.

I was now determined to get these activations in as this day was forecast to be somewhat better (not that weather forecasts are to be trusted nowadays) In any case everything was put ready for an early start as the wife needed the car in the afternoon.

I decided to concentrate on the tried and tested equipment, no testing any new equipment.

As I approached Kirnberg, things looked fine (but they had done also the last time I was here). It was somewhat more muddy than last time as there had been heavy rain storms in the last few days.

I grabbed the surveyors tripod, one of my 6 metre masts and my usual two bags (one with the radio, battery box and headphones and one with the antennas and other small items in) and headed up the hill to the cross and bench on the summit.

All started well and the tripod allowed me to position the mast where I could run out the linked dipole easily in both directions. One end got tied off to the bottom of the concrete cross (I know not perhaps the best option but it’s there and would not be damaged by the cord) The other end ran down and was pegged into the ground.

At this point the winds started – this summit seems always to be windy and cold! Well I quickly set everything else up and got on the air. 20 metres was totally dead and 40 metres not much better but I managed nine contacts in 25 minutes and while I needed to get the second summit in as well, I called it a day at this point, packed up and carried everything back down to the car and set off for Ammerleite, on the other side of the valley.

The run to where I park my car for Ammerleite took about 20 minutes and this time, I decided not to take the tripod as I knew there were convenient fence posts that could support the mast and the ends of the linked dipole. So there was less to carry this time, thankfully.

Set-up again on one of the two benches at this “Schnalz” summit and with the X108G connected to the smart phone so that I could see the display in what was now becoming a sunny day, and somewhat warmer than at Kirnberg, I was set to go. I didn’t even try 20 metres this time and concentrated on what was now a much better 40 metres. Signals were stronger with less QSB than at the previous summit.

Starting at 11:10 local (10:10 UTC) I managed twenty contacts in twelve minutes! This is how the activations used to be! There were no DX contacts in the log however even though I did listen specifically for Ernie VK3DET with whom I had a sched hoping to manage a 40 metre short path contact as had been possible in previous weeks at around this time. Today this wasn’t to be though. Rather than continue trying and while the chaser calls had dried up, I decided to pack everything up and head home so that the wife could have the car a little earlier than promised.

Surveyors tripod (only used on Kirnberg). 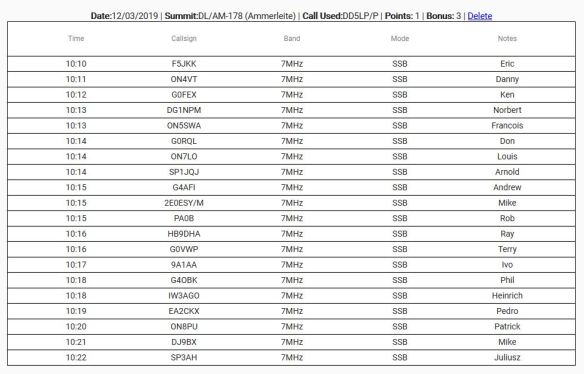 The propagation again wasn’t great but at least I managed to get two more “easy” summits off my list for the winter bonus activation points. The equipment worked reliably meaning once I recharged the battery, everything would be ready for the follow days planned three activations with Brian VK3BCM.

All in all a good activation after the failed attempt a week earlier. The sunshine and little or no wind on the second summit was a pleasant change.

The sudden high SWR indications occurred with this (known good) antenna as I had seen with the VP2E antenna on the previous activation, so I believe this is false data being sent from the X108G to the smart phone App (PocketRxTx) rather than there being a bad SWR occurring.