From the 10th. through the 17th. of July, I was supporting the World Radiosport Team Championship in Wittenberg, about 6-7 hours drive north of this QTH. I had thought I might get out at some point to accivate a local SOTA summit but as the closest to Wittenberg is probably at least a 90 minute drive away, my idea changed, to doing one en-route, so breaking the driving up as well. I have found that the “Adventure Radio” maps that cover SOTA, GMA, Humps, IOTA and other portable operation programs has a rather nice feature, that the summit information shown on the map has a note as to whether it’s a “drive-up” summit. Which in this case I needed if I was not to lose too much time on the journey. I looked at several possible summits and DM/BM-345 Kalavarienberg was the one I chose. I had hoped to be able to take the magnetic loop antenna and spent a lot of time trying to get it to a reliable state but I wasn’t quite there, so before I took it and had a wasted journey, I decided to take the 6m mast and linked dipole along with the surveyors tripod, which is becoming my preferred support method for the mast. The rig would be the X108-G again.

Kalavarienberg is about a 45 minute drive north of Nuremberg and about 10 Km off  the A-9 Autobahn that I would be using to head north on to Liepzig and then Wittenberg. The nearest village is Thurndorf.

I set off in dry sunny conditions but as I approached Nuremberg the rain started and got heavier and heavier as I got closer to the summit. When I arrived at the summit and parked in the chapel’s car park, the rain was coming in spurts. I wondered whether to wait and see whether it cleared but I was little tight on time, so I decided to put the antenna up and then see if the rain changed it didn’t. as I already had my winter waterproof jacket on, I decided to operate in the rain and probably just “bag” 4 contacts and then call it a day. Well the first three came slowly (this included one S2S) but then there was a flood of calls and that 4 target was well beaten with 23 in the log within 20 minutes. The use of the tripod paid off as it allowed me to locate the antenna close enough for the coax to run to a wooden table and benches near the chapel. Everything got wet but the new pens I have bought indeed kept working in the wet, didn’t smudge or rip the wet paper which I could have rung the water out of by the time I hd finished but rather I put the log page in a place to dry out slowly. I didn’t bother trying 20m after 40m as I wanted to head off on my long drive and dry out a little in the car. Just as I completed taking the station down and packing it in the car, the rain stopped and the sun came out! Typical! In dry weather this would be a nice summit for a family visit, the views without cloud and rain must be really nice and the propagation from there is certainly good. 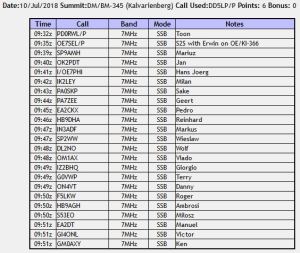 The ease of putting up the mast and antenna with the Surveyors tripod far outweighs the problem with its bulk.

The X108G now seems to be working well, although the sunshade was certainly not needed this time!

In the interim, I have found out that some of my problems with the Mag loop are down to a fault in the Rig Expert AA-30 Antenna Analyser that I use to tune the antenna. So perhaps now that I have the loop re-calibrated I’ll take it to a simple summit to try it out on again. It’s also now modified so that it can use the surveyors tripod as it’s base rather than needing a table.