Following an unsuccessful attempt to contact the SOTA activators on Norfolk Island two days ago, this was another attempt. In the mean time however there had been constant rain and hence access to my closest summit (Berndorfer Buchet) would certainly be washed out. As I could not have any delays, as this activation again had to be very early (pre 8am local time), to hit the long path window, I decided to head to a drive up summit instead. I have regularly activated Piessenberg, so I would not obtain any activators points for this summit but the purpose of the trip was to try to get another VK9 summit in the log, so activator points were not important.

I checked the already packed bags the day before the trip. I can now simply “grab and go” with my SOTA gear. Only if I intend to have a long activation or multiple activations, do I need to pack additional hardware (mainly batteries)..

Pessenberg (or Hoher Peissenberg to give it its full name) is about 45 minutes drive away from home. It has a beautiful and large church on the top, which was getting its annual outside repaint job when I was there. The location I normally use has the antenna running roughly east-west meaning radiation from the dipole would be going north-south – 90 degrees away from my ideal direction for long path. In fact given that the large church is directly north, the antenna probably only “sees” south perfectly. That said, with the centre of the Inverted V at only 5 metres above ground, most radiation will be going almost vertically in any case (NVIS). Prior to setting up, I did take a look at a track that runs off from the car park in a north-south direction, but this dropped off far to steeply and there was no likely spots to set up at. I also took a look at the end of the church. This location would be fine for a vertical antenna but a dipole would cross two paths, that are well used. So in the end, I was back at my usual location on the south side of the church.

Out of bed at about 5:30am and prepared and off by 6:15. The drive down was fine, the traffic wasn’t too bad and of course, I knew the route. On arrival I found Peissenberg, in the clouds – a fine day was forecast but it seems the clouds were hanging on as long as they could! As discussed under “The location” above, on arrival, I scouted an alternative set-up location but ended up back at my normal spot. I listened for a while and monitored for spots from Ron VK2AFW/9 on Norfolk Island. I decided as Ron was still spotted being on CW on 40m and 20m at 05:30 UTC, I could put out a call and check conditions. I managed a Greek, a Swedish and an Austrian contact but these took some time. It seems that I could not get to most of Europe (I think the skip distance was long at this point). I can normally work Mike 2E0YYY/P in the UK and he was spotted but I could not hear a thing on his frequency. At about 0600 UTC conditions changed though and I had a run of contacts from all around Europe. When I saw Ron spot on 14.310 – which is the frequency I hade been on for the last 40 minutes, I cleared the frequency to give Ron a chance at some EU SSB contacts. I thought I heard something in there, but so weak, I would not be able to work it. I then managed an S2S with Mike 2E0YYY/P in the UK, and found he had also looked for me earlier and heard nothing.

It seems that about 0602 the skip changed for long to short and that was the end of any Long Path chance of a contact with VK9.

Following my short chat with Mike, I took one last listen for Ron (who it seems had been able to work into Japan, but not Europe) and then I packed up and left. 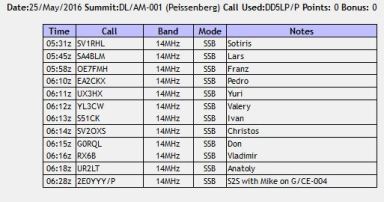 No success yet with a contact into VK9 but again the kit worked faultlessly – the problem was the propagation. Perhaps there will be another opportunity for a VK9 S2S contact before the group leave early next week?

I will check out the location at the end of the church, the next time I activate Peissenberg.