I had been wanting to activate the second Zweiselberg in the DL region for some time. This one is located near Bad Tölz about an hours drive away from my home. I had activated Buchberg across the valley from the Blombergbahn that I would use to appproach this Zweiselberg by, a couple of times.

I had hoped to activate Karwendelspitz while it still has both an Austrian and a German SOTA code but at first the path from the cable car station to the summit was closed by snow before I went over to the UK and when I returned, although the path was open again, the cable car had stopped running. Many of these services are stopped at the start of November so that the complete system can undergo inspection and maintenance before the start of the ski season which is when they are used the most. As I realised Karwendelspitze was not going to be a possibility, I looked around for another summit and found that at the end of the week, the Blombergbahn would be switching it’s schedule to only running on weekends and public holidays until the ski season. I’d have to move quickly to get up on the mountain on a week day (when there are less tourists). So Wednesday became “fix-it” day for the vertical antenna that had let me down somewhat in the UK. In fact by testing in the garden, I found that the counterpoise wires needed to be elevated off the ground (or at least no laid on soil – stone is OK) and then the VSWR came down when the antenna was adjusted correctly. So I decided to use this activation to test out the antenna with the counterpoise suported off the ground using my walking poles.

As mentioned above this Zweiselberg is near to Bad Tölz and approached via the neighbouring mountain, Blomberg (which used to be SOTA summit DL/BE-001 up until 2009). There are other routes to get to the summit from other directions, even mountain bike accessible paths and as far as the Blomberghaus there is a track for those authorised to drive their cars up it. For the majority of people however the route is the one I took using the 2 seat Blombergbahn chair lift up from the B472 road. By the way, when you park in the car park, take the small half of your €2,00 parking ticket to the lift’s ticket office and you will get €2.00 off the €9,50 ticket to ride up and down the lift, this is so that those using the lift’s car park but not the lift have to pay. Once you complete the 20-25 minute ride up the lift a well signposted and wide track takes you to the Blomberghaus – the restaurant on this summit. It is about 1 km. away from the lift and after a steep walk down and slow walk back up, you are at the Blomberghaus in about 15 minutes. 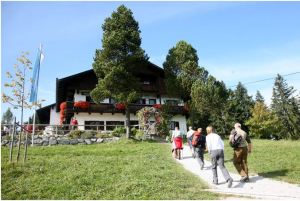 From here you can see Zweiselberg towering over you and a sign, that says 2km to the cross and an expected walking time of 1 hour. 2km in 1 hour? Well once you follow the (still wide at this point) track for about 1km into the forest, you will see why you might need more time that you would think as the track goes off to the side and becomes steep and difficult to navigate as this is the way the water runs off the mountain when it rains. During this part of the walk, I was thanking the fact that I had put my walking boots on, not left my tennis shoes on as it was a rough surface.

When I climb a track I tend to go at it quite hard and fast, then take short breaks when I am out of breath. On this track, I passed everyone who was going up the track and it took me 30 minutes from the restaurant to the summit, not an hour. At a “normal” pace I would expect it to take 45-50 minutes and indeed the first people I passed on the climb arrived at the summit about 20 minutes after me, and I had already got all of the equipment out and was ready to operate.

There is a hut called Zweiselalm, do not follow the track to that as you will then still have a good 20 minutes walk to get to the correct summit.

Once I reached the cross on the summit and had taken some pictures, I set up on some boarding about 10m behind the cross. By this time the sun had come out and I took off my quilted jacket, not needing it for the rest of the day. The weather was beautiful, a real contrast to my last activation of G/TW-002 the previous week! A few people asked me what I was doing and of course I explained. I did have a copy of  the DARC brochure explaining what Amateur Radio is about, but forgot that I did as I only had the “minimum kit” with me (as used in the UK), I will have to put this out somewhere next time (I have several copies in the “full kit”).

I set the vertical up with the tripod at full height (no wind – great) and both the 20m extension to the whip and the counterpoise elevated off the ground. Tuning the antenna to the same marking that I had used during testing the previous day in my garden, the VSWR was very low – all looked good. I then saw a spot for Antonio EC2AG on EA2/BI-068 and managed to get an S2S with him he was 5-4 with me and he gave me a 4-4 report. Well, I was only running 5W so fine we’re working. I then spotted myself and the calls started coming in. I was happy to hear Karl M3FEH calling me with his QRP signal from Cornwall, England. Weak but fully readable. After working ten stations on 20m (including another S2S), I decided to switch to 40m. With this set-up, I use a different (longer) extension to the whip on the top of the Diamond RHM-8B for 40m, so there was some changes required and movement of the support walking poles. 40m did not tune as well as 20m. This was surprising as in the garden testing it was the other way around. In any case I then managed after a lot of calling and help from chasers, telling him there was an S2S calling, another S2S contact this time with Mario HB9HAT/P in Switzerland. In all I worked a total of 15 stations on 40m before packing up after an hour on the summit.

The walk back to the Blomberghaus restaurant was a lot easier than the ascent to the summit and I would have liked to have stopped for a break but time was running short, so I kept on to the top of the chair lift and that last climb back up to the chairlift took almost as much effort as some of the earlier steep climb sections!

Painters sheet to sit on. 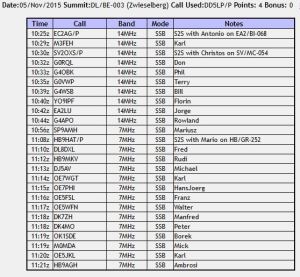 You can only really test equipment in situ and the ground conditions are variable from summit to summit and indeed from one day to the next on the same summit. So one has to be ready to adjust an antenna (especially a compromise one like the Diamond) when you reach the summit. Overall the activation went very well and if I do eventually get to activate Karwendelspitze (or similar limited space summitss) I know the set-up I have will work well enough to get me contacts across Europe if not further.