In the hope of some more long path, early morning contacts into VK, I decided Kernberg, looked as if access should be fairly straight forward being not too far away from Ammerleite that I had activated the previous week. There were two possible issues. The weather and if the summit was actually on private land as seemed to be the case from the map and satellite photos, So I may not be able to get access. There was only one way to find out. I headed out, leaving at about 6:45am local time for a planned start at 8:30am local time (0630 UTC).

The drive was uneventful and I found the location easily, looking at the map above Kirnberg is actually at Geigersau, which is at the end of a, albeit single track, well maintained road. When I arrived at the location, rather than just heading up the track to the cross, I decided to go to the farm and ask permission, after searching a little I found the farmer at work in the cow shed and he immediately said there’s no problem, it is public access but thanks for taking the time to ask.

So I headed up the short track from where I had parked my car, to find the bonus of a seat next to the cross. The views in every direction were amazing and as the rain that had started before I left home, had stopped en-route, I was all set to go. I had brought the usual equipment with me (FT817, linked dipole, 6m squid pole and small amplifier), so I started setting up with the antenna running the direction I needed it for LP to VK and then someone approached the summit, also carrying various equipment – it was Martin DF3MC. This was a nice surprise, I had told Martin I was intending to activate this summit and he had simply decided to come along and give a hand.

After considering the best set up, we went with the extra power from Martin’s 897 running 30w and his taller mast but stayed with my linked dipole and my Yaesu microphone with built in speech compressor.which works with any of the 817 / 857 / 897 family.

As I was some 30 mins ahead of my schedule I suggested Martin start and as CW is his favorite he started on 20m CW and almost straight away got several VK CW contacts (Martin was once V3DAR). He was surprised, but was even more surprised 30 minutes later when we worked three VK chasers on SSB as well – thanks Matt, Paul & Ernie. Apologies to any other VK chasers that tried but we couldn’t hear. As well as the usual W-I-D-E stations on 20m, we also had pulse interference at S9+ level from the electric fences around where we were, so weaker signals were difficult to catch.

Even with the interference, I think Martin went away impressed at what can be achieved on the top of a hill with 30w and a dipole (even on SSB) if you activate at the right time. Of course getting “the right time” is difficult and appears to change from week to week, so at best arrive as early as you can and stay as long as you can.

We did exactly that and both decided at the same time around 10:30am local, that the conditions had worsened and the Sun was getting a little too hot and so we agreed to pack up and head in opposite directions to our homes. Both agreed this had been a very enjoyable and successful activation.

Here is a gallery of the photos I took of the fantastic views from the summit followed by a video that I have loaded to YouTube. 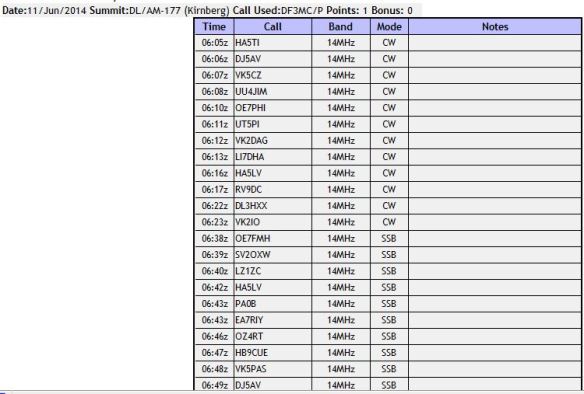 A very enjoyable activation. I find it more pleasant when two are activating together. If nothing else it gives more time to take photos/videos.

This is a site than can be recommended to anyone wishing to activate a summit. It is not difficult to get to and the views from it are amazing. Shame about the electric fence interference.