Now that I have moved back to Europe from Australia, I did not want to lose contact with my friends in Australia, especially those involved with SOTA. My main station is still en-route from Australia however I carried my SOTA kit with me on the plane, so I have at least some equipment available to try to get contacts back to VK-land. I am presently in rented accommodation, so setting up antennas here could be an issue, so why not from a summit.

Rod VK2LAX and I planned this first 2014 European SOTA activation for me, but I was confused with the correct time as based on the times I know we have had good contacts into Germany from New South Wales, Australia, was around dusk & sunset in Australia and I thought dawn in Germany. But this simply does not tie up with the Grey Line map – according to that at dawn in Germany, contacts should be possible into the US but not into VK. I later got confirmation of my suspicions that the contacts EU-VK were long path not the short-path indicated by the grey-line prediction websites. In any case, Rod and I decided to “give it a go”.

Given that dawn in Bavaria is at 7am local (UTC 05:00) currently, I was up at 5am to be able to get ready, drive the 45 minute journey, walk to the peak and set-up before sunrise. I was on the air at 04:45 UTC, it was still VERY cold and there were very few stations around on 20m. I wondered whether my rig was working or whether some damage had occurred  in transit. Then I heard W1AW/3 in Pennsylvania USA, gave him a call – he got  part of my complex call sign (DL/VK2JI/P) but then went back to another station. A second attempt about 10 minutes later “bagged” this special call and more importantly proved the FT817 (5w SSB running from the internal LIPO battery) and the SOTABeams linked inverted-V dipole was indeed still working. Actually working very well.

The first 45minutes of operation was patchy with contacts being spaced out quite a lot but as I crossed 05:30 UTC things got a lot better with contacts around Europe and Scandinavia as well as contacts back into VK2, 3 & 5. As 9am local (UTC 0700) approached activities died down again and after putting out a couple of CQs with no response a couple of UK stations called to keep me company. Thinking that conditions had died and since more walkers were appearing at the summit, I decided to close down and pack up. I later found that this had just been a dip in conditions and the following hour would have been better than the previous one. This appears to show that hours 1-3 after sunrise appear to be the best time for long distance contacts, so my next activation will be planned for 06:00-08:00 UTC rather than 05:00 – 07:00 UTC.

Here are some photos of this beautiful summit, like many summits in Bavaria, a Barock style church has been built on the summit. 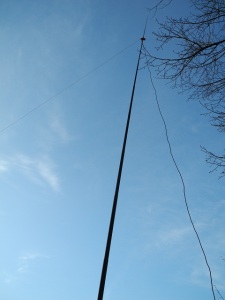 The 20m Inverted-V antenna atop the 6m “squiddy””.

View from Peissesnberg to the South.

View from Peissesnberg to the North.