This activation was in response to a request from Klaus DF2GN for a DM – VK Summit to Summit (S2S) contact.

I arrived on-site a little earlier than planned which allowed me to walk down and back up the trail (to meet the access on foot into the AZ zone ARM guideline) and set up and be operational 15 minutes early at 07:15 UTC. I did not stay as long as originally planned due to a plague of strange looking flies swarming around me despite the liberal use of insect repellant but the evening was a success. I regret not packing up 10 minutes later however as I might have managed a second S2S with GM4COX but I’m happy with my S2S with Klaus DF2GN portable on DM/BW-195, which was the main reason for the trip. I also worked another German chaser and eight VK chasers. I had hoped to have my “qrp” amplifier fully working to boost the FT817’s 5w output but it was not to be and while I had it with me, the unreliability of its operation at present, made me decide to work just with the FT-817 “barefoot”. They also say, don’t make two changes at the same time and I have made another change to my set-up. While looking for some parts last week, I came across a project that I built (or to be more accurate, boxed) some time ago. It is a 150W battery booster. Fed with anything above about 10V it can output anything up to 35V DC using it’s inverter. I had set this to output 13.8V previously and now decided to try using it with my 3S (11V) LiPo battery and what do you know – it works perfectly. I have an alarm on the LiPo to sense if any cell is dropping below a safe level and in the 1.5 hrs of operation all went well. I have found no interference from the inverter in the DC voltage booster. Perhaps this is a solution for others who are looking to use 3S LiPos to supply rigs (or amplifiers) that prefer a 13.8V supply. The booster and 2 x 5000maH LiPo batteries fit easily in a Jaycar SLAB battery bag with room to spare for cables sensors etc.

In case anyone is interested in the DC-DC convertor – it cost me AU$7.98 including postage – the same item is now available for $5-$6. A whole list of them can be found on eBay here.

My apologies to the stations, both chasers and activators who came on a little after I packed up, but the flies were getting really unbearable! 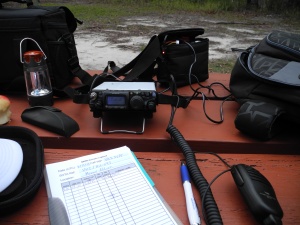 The audio pickup of received sound is not so good……