Sunday 7th. July 10:10 local (8:10 UTC) and I had set up my FT817 and EFHW antenna just down from the top of the Jenner mountain (1874m asl) near Berchtesgaden in Bavaria. It was a beautiful sunny morning but I only had 30 mins to activate the summit because of other plans. I tuned on the FT-817 on 40m to be hit my a barrage of stations splattering across the usual SOTA frequencies. I put out a couple of calls on 7.090 as it was less conjested than 7.118 (my planned frequency). No answers. I then tried to self spot but got an error in rucksack radio that I could not read in the bright sunlight. I tried again on 7.118 and to my relief Milos S53EO came back to my call, he did not have Internet connectivity and so could not spot me but OE7HPI who I worked next did and further calls followed but by this time the QRM from stations near to the frequency was becoming really bad. I was lucky to manage two more contacts with DL3HXX & HB9AAQ meaning I can claim the summit but by the end of my available time the QRM had got so bad that I would not have been able to work any more stations. I had hoped to operate on 20m as well but simply ran out of time.

What I have learnt from this is that I need to find why spotting from my phone didn’t work and try 20m first next time. The next planned activation has limited space for a 40m wire in any case so is likely to be using just the whip on 20m. The next summit is the Zugspitze at 2962m, the highest place in Germany.  Place check SOTAWatch as date may change. As I have to drive there from Munich, the activation will probably be too late for a contact into VK even if the path were open.

Jenner – way to the summit 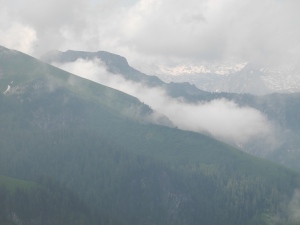